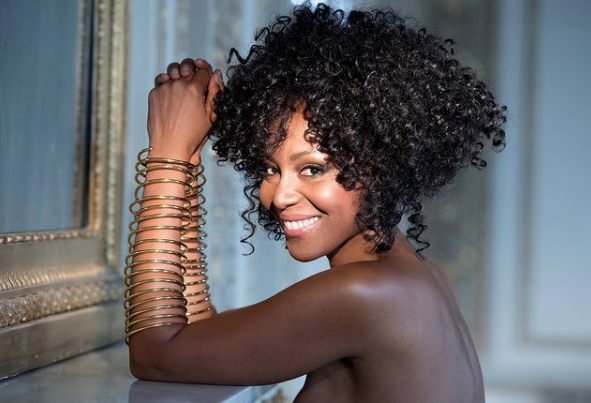 The San Felix native, who premiered in Hollywood with this film, said she had the full support of Lady Gaga and director Ridley Scott.

Irma Medina, better known as Ira Fronten, comes from a line of strong women. It is also. She recognizes it and is proud of her ancestors.

But it also comes from a family that helped build the country. With a great-great-grandfather who fought in Toma de Güiria in 1813, the actress, model, broadcaster, producer and screenwriter in Italy has proven what it means to be a Venezuelan since arriving in Italy in 2006.

The 42-year-old actress from San Félix, Bolívar state worked as the station’s VJ Much TV, Moderator of El Gourmet and in various Italian, Argentine and Colombian series and films.

In September, Ira Fronten received the cinema award from the city council at the summit of The Last 20 in Molise. This unexpected recognition has a special meaning for her, especially as a Venezuelan and Afro-born woman.

“It is of great professional importance because it is the first award that I have received as a film actress in Italy; as a woman who is dedicated to the cinema and not for a particular job or for connecting me to a movement or ideology, ”she emphasizes.

In addition, the actress adds that this award is in response to her work as an activist for the benefit of foreign actresses in Italy.

But the model also shone at the Venice Film Festival, where she presented the Sorriso Diverso Award and took part in the Cartier Glory Gala. That experience sums it up as fantastic.

In fact, she was not planning to visit the red carpet, but to go to La Mostra as a spectator. However, various events brought them to the city of canals. Suddenly the actress reactivated all of her networks, united her team and went to Venice.

«Over time I have learned to listen to the messages of my Guardian Angel, God, of my heart. And there was a special magic on this red carpet. There were great celebrities. It was a moment of glory, I felt happy. And when it was my turn, the RAI camera, the festival’s official channel, was pointed at me. He just follows me! It’s like a blessing from God because I’ve prayed a lot to the Lord to give me the international start I’ve worked for so many years, ”he says.

For Ira Fronten, however, an opportunity arose that, in retrospect, he considers insane because of its importance: House of Gucci would allow him to share the canvas with artists such as Lady Gaga, Adam Driver and Salma Hayek. And also directed by Ridley Scott.

For legal reasons, you can’t reveal too much about the production or your character. But when he talks about his experience, he becomes emotional and his face shines.

Her path to the House of Gucci began thanks to casting director Teresa Razzauti. It was she who earned him a leading role in an Italian television series. Years later, after realizing Fronten’s potential, he invited her to audition for Scott’s film.

“The first time I’ve had an casting with my name on the first page as it hits the stars. Three months later they sent me the reply: ‘Ira was cast in the film and one of the scenes is with Lady Gaga.’ I said no! The rest was excitement, preparation, and nerves. It was my first set in English. And I prayed so much that at some point God said to me: Stop it, shut up, ”he laughs.

As an anecdote, Fronten recalls a moment with Lady Gaga: “It was beautiful. She noticed that I was a little nervous, I had the camera in front of me, they wanted to take a close-up of me. He felt it, Stefani Germanotta is a very deep person. I learned there that in real life she doesn’t like being called Lady Gaga. She left the set, touched my back. And when I turn around, she was right behind me. When he looked at me with his deep eyes, he said, ‘I believe in you, trust you, little one’. And it was returned. It’s the best gift this woman could give me, because one of the things I’ve worked on the most is believing in myself, ”he recalls.

But not only the American singer gave him encouraging words. Ira Fronten comments that Ridley Scott has recognized his work three times.

Before I left, I wanted to say goodbye to him. I thought: now I can screw it up because I’ve already recorded. I waited a little and went to him to greet him and he said oh, anger. Good Good. Excellent actress. You’re a very good actress. ‘ I came home crying. For a director of his caliber to say that this Venezuelan, who comes from the La Gallina district of San Félix, had her sisters grow up with her mother and is thrown at them with balls, is the most beautiful gift in life.

Fronten is still enthusiastic about the experience on an international set. There he passed the English test, a language he has learned a lot and which he still wants to improve. The actress invites you to see the final product, but more than that, she wants to share the satisfaction and joy she feels with all her compatriots.

On the other hand, her time at the Venice Film Festival and House of Gucci is tantamount to an Oscar for her, as she received special treatment from Venezuelans.

The actress explains that she has not yet processed all the affection and messages of support. He knows he’s happy with everything he’s done.

Fronten was suddenly surprised by the question, what does Hollywood mean? “The first answer that came to mind seemed exaggerated, but it’s my purpose in life. I don’t know where that came from. The lord will know what he’s going to do with me. I deal with the resources he gave me.

She says even more excitedly: “The joy I feel when I’m filming, when I play, when a text comes into my hands, I don’t know … Hollywood is a brand, it’s a banner, but it stands for wanting to reach a very high level in the race. It’s not just the red carpet and lights, it’s the opportunity to talk to a lot of people. And be it as an actress, as a person, for me it is the purpose of my life ».

: RAISING THE TRICOLOR- Irma Medina is the new Venezuelan actress who will make her Hollywood debut with Lady Gaga (+ PHOTOS) https://t.co/z1GsNr0YOX pic.twitter.com/JTZU2rIBAO

Have the information instantly on your phone. Join the Diario Primicia group on WhatsApp using the link below: https://chat.whatsapp.com/JJTuanq3QXp28eDohdWD68

We’re also on Telegram as @DiarioPrimicia, join us here:https://t.me/daily newspaper